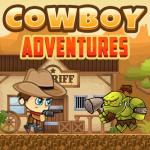 Cowboy Adventures is an endless running and shooting game in which you play as a cowboy doing a great mission. You have to defeat hordes of evil creatures invading your town. At y8 boys games, you have to face zombies, mutants, skeletons, and more, and they are crowded and dangerous. Your character autoruns here and all you need to do is to make sure he is safe and he shoots at enemies to kill them before it’s too late because enemies will run into him. If he touches any of them, he loses a life.

Remember that he has only 3 lives. At first, you have only 35 bullets. Don’t waste them at the beginning. You will get more bullets when you kill every 10 skeletons. So if you haven’t reached this milestone yet and you run out of bullets, you can’t kill them and protect yourself. So, it’s better for one shot one kill. Just shoot when enemies appear.

On http://m.y8y8y8.games/, along the way, you also collect power-ups such as a heart for extra lives and bullets. This helps you so much on your adventure. With them, you can go further and kill more enemies. You deal with different kinds of enemies. Beware of the enemies flying in the sky and on the ground. You can kill some kinds of enemies with only one shot but some monsters are stronger and you have to shoot at them many times. You can shoot them or jump over them to avoid them.

It’s not all about this awesome game. While playing, you will discover something interesting in the game. Good luck and don’t forget to test yourself in other challenges such as Mr Jack vs Zombies and Protect The Earth.

Space to shoot and up arrow to jump.