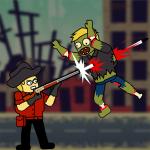 Zombies are human but are transformed by a scary virus. Lately, they have almost conquered the world. The increase in the number of zombies has led to the development of a trend that is zombie hunting. In Mr Jack vs Zombies at y8 games unblocked, humans no longer hunt animals, they hunt zombies instead. It is to protect myself, people, and the world. And you are Mr Jack, a professional hunter and you kill every single prey in your sights.

Now, let’s sweep these zombies out of this world. This game is a great mixture of puzzle game and shooter game in which you must kill every zombie with as few ammo as possible in each level. You and zombies stand still. They neither move nor you. Then, you have to take advantage of every shot and the platform and the wall to shoot down zombies.

On http://m.y8y8y8.games/, you have a certain number of bullets to use in each level. It’s better to kill several zombies with only one shot if it’s possible. To make it possible, you can aim to the platform and the wall, then the bullet will bounce off and can kill more than 1 zombie. Of course, you can make it if you are lucky and skillful enough. The puzzle element here is shown in the fact that you have to find the perfect way to kill all zombies with the least amount of shots.

Let’s observe, try, and try again until you reach that goal. Show these zombies that they made fun of the wrong person. Have fun here and in other choices of games such as Dino Hunter: Killing Strand and Enemy Aircrafts.

Aim and shoot at zombies by using your mouse.