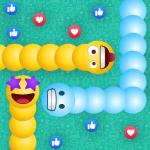 What do you come up with when you see a game named Social Media Snake? Build a snake community in social media or play as a snake who has many followers in social media? In fact, its gameplay doesn’t relate to social media much. Its gameplay is similar to Slither.io that you also can play at Y8 games. Become the biggest and longest snake is your ultimate goal here. To make it, you have to eat as many like buttons, stars, and other items as possible. In this growing race, you compete against other snakes. Your life is threatened by 2 things.

One is other snakes and one is the invisible wall around the map. If you hit the body of other snakes or you crash into the wall, you die and leave behind a chain of items that has the same length as the length of your body. Other snakes will have a big party with what you left behind. On http://m.y8y8y8.games/, you can trap other snakes with your long body just by moving around one of them. Remember that you can do it when you grow up enough. In the beginning, when you’re still small, it’s better to focus on eating.

Besides, you can boost your speed without losing anything. However, control the speed carefully because you can easily cause an unexpected accident. As mentioned above, this game is simply about eating and growing. You can’t see the rank of you and other players like on other games have the same gameplay. It’s designed for fun rather than for competitiveness. Then, kids can enjoy it as well.

Keep in mind that on our site, besides tons of games are available, you always have new games to explore. Some cool options for you are Battledudes.io and Catac.io.

Instructions: Mouse to move, left click to boost the speed.