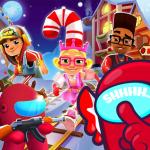 Amoung us - Subway Surfers

Amoung us - Subway Surfers GamePlay:

Among Us Subway Surfers is an Among Us endless runner version of the famous Subway Surfers. If you love Among Us and endless runner games, let’s try this game among tons of different choices at Y8 games free. The game sets in a metro station and you play as an impostor who is trying to escape from the police. Here, you have to avoid obstacles and oncoming trains.

Dashing, running, sliding, and dodging to avoid hitting any obstacles in front of you. If you crash into one of those obstacles, you get caught. Like other endless runner games, your character auto-runs toward and you can’t stop him or make him speed up but turn to the left lane and right lane to dodge barriers and collect coins. The imposter runs pretty fast, so make sure you take action at the right moment and keep an eye on him to protect him from all obstacles on the way.

On http://m.y8y8y8.games/, you don’t have to care much about the police. You only get caught once you hit the obstacles. The police can’t speed up and he isn’t able to use special items like you. You have more advantages than him. Yes, you can get some useful items such as a magnet that collects tons of coins at once, super sneakers that boost your speed, a jetpack that raises you in the air, and a 2x multiplier that doubles the coins you get. You also use coins that you have collected to buy those items before each match.

There's nothing better than playing a game inspired by two famous titles, don’t you think? Good luck. Challenge yourself with new missions that Craft Runner - Mine Rush and The Flappy Virus. offer. Have fun!