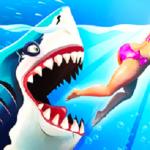 If you are angry for something now, let’s Angry Shark help you relieve your anger. This cool destruction game allows you to kill, break and destroy everything without paying for that. Play as a huge angry shark, you use your body and sharp jaw to destroy everything from killing humans to breaking helicopters and boats and more. Why? Because humans do bad things to the ocean. They destroy the habitats of aquatic animals. And you are a shark who is being hunted by them.

At y8 com girl games, you will revenge. Kill as many people and destroy as many things as you can to let them know that they are wrong when touching you. You can kill living things in the ocean, on the water, and in the air. Make many super jumps by diving deep and come up fast to pull the aircraft into the ocean, break boats, ships and more.

After attacking, your health will drop, you eat fishes to recover your health and keep bringing destructions on http://m.y8y8y8.games/. Reach the highest score before your blood runs out. However, you also get hurt by the floating mines that humans placed here. Swim carefully to avoid them and save your life.

Take advantage of the time to perform many super jumps to earn extra score and play several times to break your own records. It’s not only fun but also helps you relax. If you want to break more things, let’s try out these following options Cat Run and Angry Gran Run.

Arrow keys to move and Space to attack.