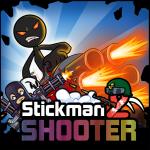 Which strategy will you use when your castle is under the attack of enemies? Stay still and get what they bring to you or fight back with all forces? You won’t let them take over your castle, will you? Then, teach them a lesson and let them know they made a mistake when attacking you. Stickman Shooter 2 welcomes to an epic defense battle ever. At juegos de y8, you are alone standing in your castle and try to protect your base from enemies while your rivals are too crowded. How can you win? Don’t worry.

Apart from the gun that you are holding, your tower is equipped with various weapons and some power-ups are also available to help you in the battle when can’t deal with your enemies alone. Turret or cannon, or rocket launcher shoot automatically. You just need to take care of your gun. Aim and shoot at every enemy you want.

After defeating a wave, other waves will come and they become stronger and advanced. So to win, you use the money to upgrade your weapons on http://m.y8y8y8.games/. You will see a blood bar in the upper left corner of the screen. It will drop a little bit when enemies come close to your castle attack them or they shoot at your castle from far away.

The important thing to win in this defense game is to upgrade your arsenal whenever you can. Stay alive and eliminate the invaders until the last waves. At that time, you can move to other fun games such as King Rugni Tower Conquest and Swamp Attack Online.

Use your mouse to shoot and choose items.