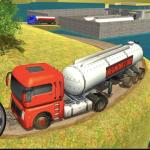 You may have played many racing games or driving simulators, but you may never have a chance to try any games game like the following game for sure. Oil Tanker Truck Drive is a cool and challenging truck driving simulator game in which you won’t control a monster truck, a van or other common trucks.

Here at y8 game new, you will drive an oil tanker truck. This truck is huge and has a large cargo box filled with oil. Your main objective is to reach fuel refinery by following shown direction in each level. This awesome driving game offers 10 levels as 10 missions.

Unlike other games of the same genre in which you have to play from the first level to the last one and you must complete the previous mission to unlock the new one, in this game you can play any levels because they are unlocked. However, you should play from the beginning to advance in the game. it’s much better than play randomly.

On ygames8 , you must meet different requirements of each level within a limited amount of time. For example, you have to reach fuel refinery with more than 2 minutes on the first level. The time limit will gradually decrease through each level, so you have to pay attention to the mission and try not to make any mistakes along the way. You won’t drive on the street in the city but in the mountainous areas. If you make a mistake, your truck can be flipped over or fall into the abyss. Conquer each turn and curve while avoiding other vehicles. What is the best result you got?

Show off your driving skills and deal with different challenges in the game. Don’t forget to play other options such as Old Country Bus Simulator and Tommy Tow Truck Puzzle

You drive by using arrow keys and brake by pressing Spacebar.