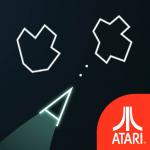 Atari Asteroids is about shooting at asteroids and flying saucers to blow them up. By doing it, your ship will be safe and sound in a space full of dangers. You may have played several games that have the same gameplay at Y8 arcade games. However, the asteroids and flying saucers don’t mean to attack you. It’s just because you are in their flying way. You can’t just move around to avoid crashing but you have to shoot at them to make them explode.

Then, you can keep your journey going in space. Watch out every direction because they come from everywhere. When you shoot at each asteroid, they will break into smaller pieces and with the effect of the shoot, they drift and reappear from the sides. You have to quickly dodge or keep shooting at them. With each exploded asteroid, you earn 20 to 100 points. On http://m.y8y8y8.games/, you have 5 lives each time you play.

Each time you get hit by asteroids or get shot by flying saucers, you lose 1 life and you can’t earn more lives during the game. With 5 lives, how many points you can get? Use thrust and hyperspace features to have better performance but don’t make use of them too frequently because your ship might crash. That won’t be what you want to happen for sure. It’s a true hand-eye coordination challenge.

Your eyes and hands must coordinate well to get the highest score and break it, then set a record each time you play. Hope you have fun here and you will have so much fun with other games such as Soldier Legend and Defend The Tank